Did the Battle really take place in AD 872?

Neither archaeological finds nor written sources can give us certainty that the Battle of Hafrsfjord happened precisely in the year 872. When we celebrate the Unification of Norway base don this date, we are following a tradition established in 1872. That’s when the 1000-year anniversary was celebrated, with, among other things, the then crown-prince Oscar unveiling «Haraldsstøtta» – an obelisk monument – in Haugesund. 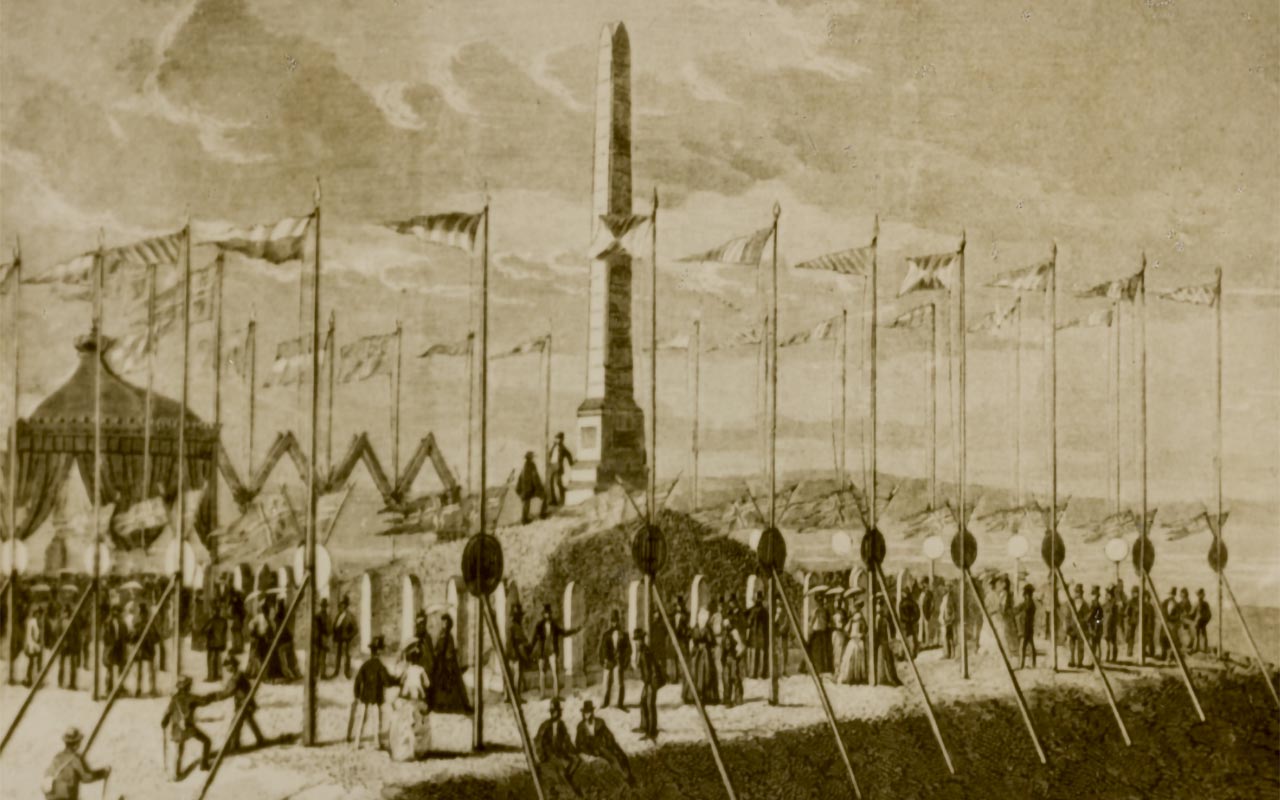 Postcard from the unveiling of «Haraldsstøtta» at the 1000-year anniversary in Haugesund in 1872.»Haraldshaugen» (The Mound of Harald) and «Haraldsstøtta» (The Pillar of Harald) are Norway’s national monument, put up on the site where they presumed that Harald Fairhair lay buried.

Different datings of the Battle of Hafrsfjord

The dominant historical belief in the 19th century, promoted by among others P.A. Munch and Gustav Storm, was that the battle took place in AD 872. This was based on the chronology of the sagas, and a mention in Irish annals of Olav Gudrødsson (in Irish: Amlaib Conung) who it was said in AD 871 left Ireland for Lochlann, possibly Rogaland, to help his father in a war. It has been speculated that he participated and fell at the Battle of Hafrsfjord.

There has been discussion regarding the dating of the battle both before and after 1872. At the beginning of the 19th century Gerhard Shøning argued that the battle took place in AD 885. Halvdan Koht, in 1921, argued that the battle must have happened at about the year AD 900. He based his argument on counting the generations from Harald Hardrada (who died at Stamford Bridge in 1066) back to Harald Fairhair.This suggested that Harald Fairhair must have been born around the year 865, and even for a saga hero it would be astounding to win a viking battle at the age of seven years.

King Olav V signs the standing stone on Ytraberget by Hafrsfjord during the 1100-year anniversary in 1972. The king also visited the St. Olav’s Church at Avaldsnes and held a speech at «Haraldsstøtta» in Haugesund. (Photo: Knut S. Vindfallet)

Archaeological remains of the Battle of Hafrsfjord

But 872 has remained as a possible date for the Battle of Hafrsfjord. One of the reasons for this is a wonderful example of how the combination of old written sources and new archaeological techniques uncover ever more ancient secrets.

There hasn’t been found any certain evidence of the battle in or near Hafrsfjord, but incredibly enough there are possible traces of the battle’s consequences on Iceland! According to the Icelandic Landnámabók («Book of Settlements»), written down sometime between AD 1100 and 1300, Iceland was settled in AD 874 by Norwegian nobles who wanted to get away from Harald Fairhair’s harsh authority.

Famously, Iceland is a volcanic island, and modern technology and studies of the ice on Greenland have shown that there was a large volcanic eruption on Iceland in AD 871 or 872. The eruption led to the whole island being covered by a layer of ash. This ash layer is still visible in the soil today. Archaeological excavations on Iceland confirm the story from Landámabók. Almost all the found remains from the first settlements on Iceland lie just above the layer of ash from the large eruption.

It is also worth mentioning that the geopolitical situation in north-western Europe at this time was very advantageous to a Norwegian king with ambitions of unification. Danes and Englishmen, who could otherwise be expected to wish to prevent the success of Fairhair, were at this time busy fighting each other.

The future may bring more puzzle pieces of the larger picture of our past. It may be archaeological finds or the discovery of a till now unknown written source that may give us a more secure dating of this seminal event in the history of Norway.