Our best source for knowledge about the Battle of Hafrsfjord:

The Lay of Harald

Haraldskvædi, or «The Lay of Harald», would be for most people a rather complicated read, but when we are celebrating the Unification Anniversary in Rogaland, it is hard to avoid this literary pearl from the time of Harald Fairhair. This is, after all, the song where Hafrsfjord is named as the location of the great battle. Here you may read all the 23 verses, an explanation to it, and why it is considered our best source of knowledge about the event that unified Nordvegr under one king. 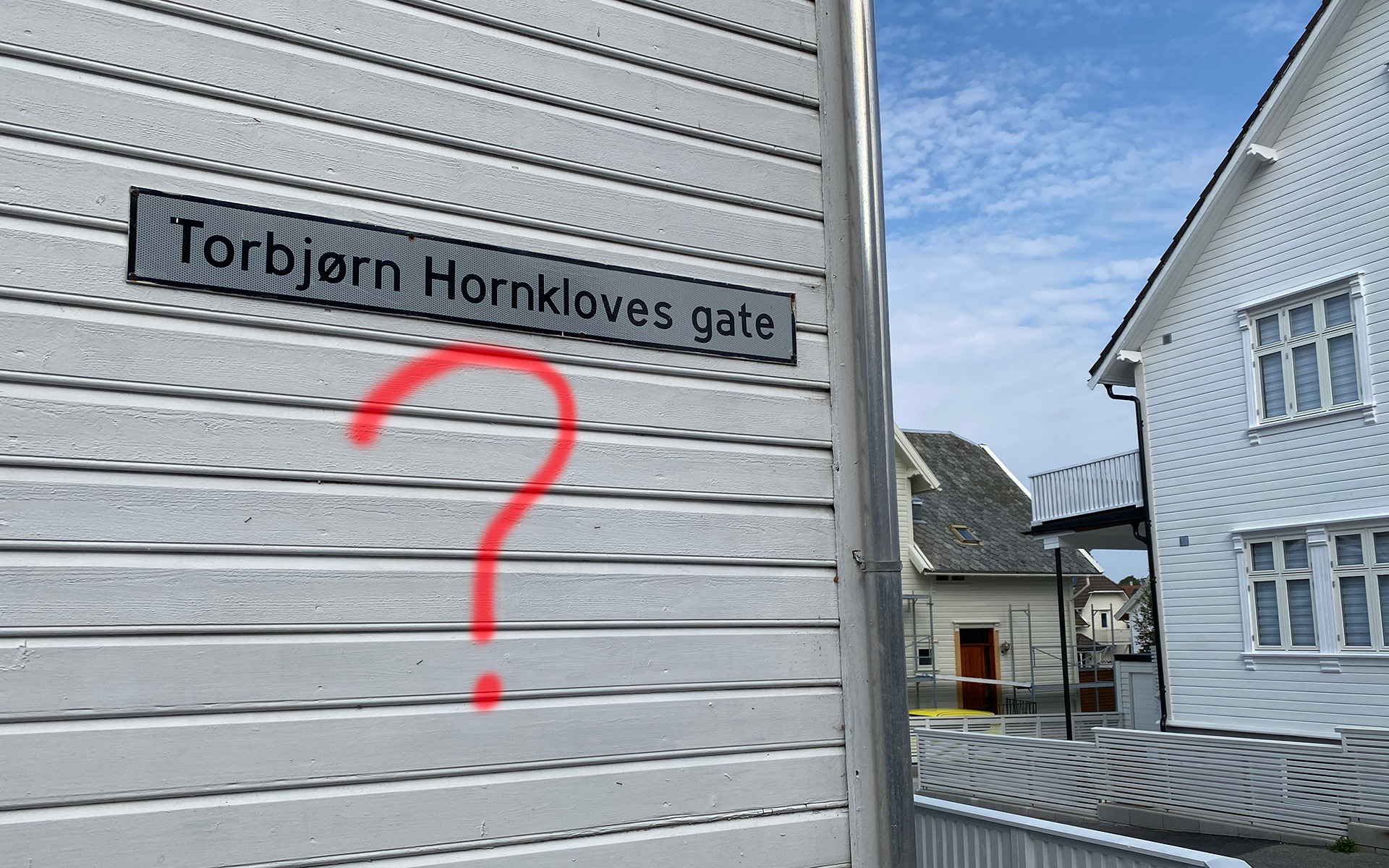 In the neighbourhood of Våland in Stavanger there is a street named after Torbjørn Hornklove. What does that have to do with the battle of Hafrsfjord?

Skalds and their Poetry

Let’s take it from the beginning. The Viking period was a golden age for skaldic poetry. A skald was a person made and performed various forms of poetry. The lays were a form of narrative poems, and we don’t know whether the skalds song or spoke these poems. Kings and other powerful people would often have skalds among their retinue. It was the skalds responsibility to make and perform poetry that praised the king, a little like fotball supporters cheering on their teams today. But the skalds had a challenge that football supporters don’t have. At the home games of the football team Viking, a mere 3 km away from Hafrsfjord, their supporters can chant «Viking of west, Viking are best, Viking’s the team that gives us a feast…». And they can get away with this even if it contains several – let’s be polite – imprecisions. It’s not every day that Viking are the best, and watching them play is definitely not always a feast. A skald in the royal retinue could get his tongue torn out for such hyperbole. The poems would have to be truthful, the praise base don reality. Otherwise they would be considered ironic or even mocking.

Most of our sources cite Torbjørn Hornklove as the man behind the Lay of Harald. He was one of the skalds of Harald Fairhair’s retinue, så he was presumably in the thick of the action. Skalds were expected to partake in battle as warriors, so that they could describe the battles in detail. The Lay of Harald is a praise poem to Harald, probably written in his own lifteime, by one of his retinue. The most famous part of the poem describes the Battle of Hafrsfjord, and we presume that Torbjørn Hornklove himself partook in the battle.

The Magic of Rhyme and Rhythm

We do not know whether the skalds ever wrote down their work. If they did, then these sources have been lost. This was after all a while before archiving routines were developed. Pencil and paper would have been in short supply, so if anything was to be written down it would be carved  into wood or stone. When you have finished reading this article you may try your hand at inscribing all the 23 verses of the Lay of Harald onto some planks. That should make you realise why they chose a different way to store their poems in the Viking period: They learnt them by heart, remembered them, and taught them to others.

But in the 1220’s the Icelandic author and politician Snorre Sturluson wrote a book about the old poetry, and included examples, including parts of the Lay of Harald. And from that time till today, we have written sources that document these old poems. So, as far we know, the Lay of Harald lived from mouth to mouth in the minds of skalds from generation to generation, from the late 800’s till about AD 1220.
Is that even possible? Was the collective memory of Norse society able to keep the exact content of this lay intact for more than 300 years? Many historians say yes, while others say, it’s complicated.

Think of a nursery rhyme, such as «Ring a ring of roses». Such rhymes have survived for generations before someone wrote them down. And, as they have a fixed rhythm and a lot of rhyme, they are easy to remember. This means that they change little from generation to generation.

The skaldic poetry also has fixed rhythmic patterns and rhymes that make them easy to remember and difficult to change. It’s not, usually, a matter of ending rhymes, such as roses and posies, but primarily alliteration, which means that several of the words begin with the same letter.

The Lay of Harald mostly follows the poetic metre called Málaháttr, but with parts in the metre Ljódaháttr. A poetic metre is fixed rhythmical pattern, a design, that you can choose to give shape to a poem. Haiku and limericks are examples you may have heard of. If the Lay of Harald had been a limerick, a verse of it could look like this:

To Hafrsfjord came Harald the Fair
Ready to kill and to scare
Coz’ that’s what you do
When you want to
Yourself king of Norway declare!

But – and it is a relief – the Lay of Harald is certainly no limerick.

Málaháttr has normally five syllables per line, two stressed words with alliteration in every odd line, and one stressed word in every even line that alliterates with the two in the line above. This fixed form made it possible to learn and remember the poem, and reduced the possibility of alteration as the generations passed the poem on. This is why we’re more willing to trust the content of the skaldic poetry than the stories of the sagas*. And yet many of the skaldic poems were preserved by being written down in sagas. They are often quoted to support and prove the truthfulness of what is told there. So the sagas use the skaldic poetry as a source for historic content.

Put Together from Different Sources

The Lay of Harald, as we know it today, consists of 23 verses. We are not certain that all these verses belong together, nor that they were made by the same skald, but there are different reasons to presume so. The 23 verses do not appear all together in the sagas, but have been assembled from different sources by historians in more recent times. What unifies them is the style, the metre, and that most of the verses can be interpreted as part of a dialogue between a raven and a valkyrie*. The Valkyrie poses questions, in verses 3,15,18, 20 and 22, and the raven answers, in the remaining verses. So parts of the poem has been found quoted here, and other parts there, and then the historians have presumed that these verses quite possibly belong together. 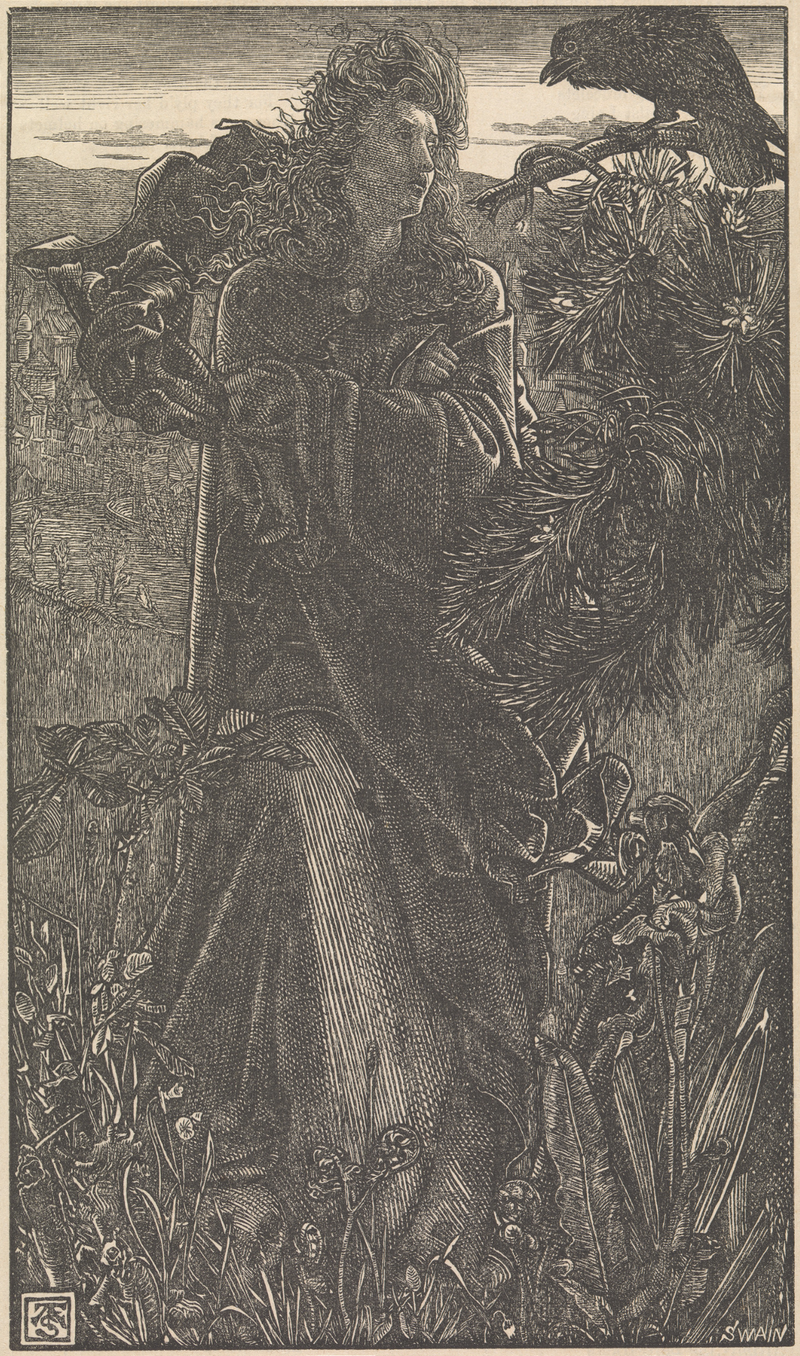 Wood cut by the artist Joseph Swain, that shows the valkyrie and the raven conversing. The picture was used to illustrate an article about the Lay of Harald published in London by Bradbury and Evans in 1862. The original is in the National Gallery of Victoria, in Melbourne, Australia.

Some knowledge will help you cope with the challenges of reading the poem itself. Skaldic poetry frequently uses some poetic devices where everyday words and phrases are replaced with more poetic terms, such as the so-called heiti and kennings. A modern example could be the word beer. A common rephrasing is to call it a pint, and many people will know what you’re talking about when you call it a cold one, but the cockney rhyming slang pig’s ear is more unknown. But, then, cockney rhyming slag is after all an inventive oral culture intended to create an in-group whose language is unintelligible to outsiders. The Lay of Harald is full of such rephrasings that were mor or less well-known in Harald’s time, even if they even then could be puzzling and mysterious. Many of them require a deep knowledge of Norse mythology to be understood. So it’s no surprise that many of the kennings in this poem should appear unfamiliar, considering that 1150 years have passed since its composition. So when the skald uses the term «corpse-sea-taster» instead of raven or carrion-eating bird, it is understandable that we get confused. By the way, there are as many as 20 different rephrasings (kennings) for alcoholic drink in Norse skaldic poetry. That is not really that much, considering that there are 600 different rephrasings for war or battle, 274 for woman, 1541 for man or warrior, and 413 for gold, according to the internet page The Skaldic Project. Just so it’s said!

Another trap for the modern reader is what may be called reversed word order. It is a phenomenon frequently found in doggerel, to try to fit meaning to prescribed rhythm and rhyme. But ancient Norse had a different grammatical structure, that enabled freer word order than most modern languages. So we often encounter difficult word order also in the translations of the Lay of Harald. The intended meaning «I believe that tonight you kept yourselves near where you knew there lay corpses» may become «Near I believe you kept yourselves tonight, where you knew corpses lay.» So be patient, read slowly, and the meaning will come to you.

The 23 verses of the Lay of Harald may be divided into 6 parts:
In verses 1 and 2 the skald addresses his audience and tells them he will be speaking of the wealthy Harald and his struggle. Then he introduces the valkyrie and her interlocutor [?partner?] the raven, also known as Hyme’s skull-tearer. (One of at least 38 different rephrasings of the word raven in Norse skaldic poetry.)
In verses 3 and 4 the conversation between the valkyrie and the raven is begun.
In verses 5 and 6 Harald Fairhair’s youth and personality is discussed.
In verses 7 to 13 the Battle of Hafrsfjord is described, and this is is the most famous part of the poem.
In verses 13 and 14 it is told how Harald divorces all his wives so as to marry the Danish princess Ragnhild.
In verses 15 to 23 the daily life of Harald’s retinue is described, including how he treats his warriors, skalds and berserkers, and about entertainment at the royal seat.
Then all we can do is wish you good luck! Here is the Lay of Harald in complete versions in English, and Norse. The paranthesis tells who is the narrator: the skald, the raven or the valkyrie.

READ IN ENGLISH AND NORSE HERE