The Battle of Hafrsfjord has become the emblematic event for the unification of Norway, and according to the sagas the final battle for the control of Norway was right here, at about the year 872. But how large was really Fairhair’s realm. Was it like the Norway of today?

Karmsundet, the channel between Karmøy and Haugesund, the beginning of the North Way, with St Olav’s church and the area of the royal farm in the foreground.

We may never be entirely sure, but it is assumed that Fairhair unified primarily  Norðvegr.  This term appears in English sources around the year 890, and its meaning has been much discussed.

​In Old Norse the word nor signifies a tight waterway or a narrow channel. Consequently some theoreticians have claimed that the name Norvegr may mean «the way of the tight fjords and channels». But the prevailing opinion is that the name refers to the cardinal direction north, and means «the way to the north». Nonetheless, both meanings suit our coast from Rogaland northwards. And in this context «way» signifies the sailing route: the only way for long-distance travel was by boat.

When we say that Harald Fairhair unified this area to one realm, this means that he defeated local chieftains and minor kings, and took the power in their areas, or made alliances with them peacefully, and was thus recognised as a high king. 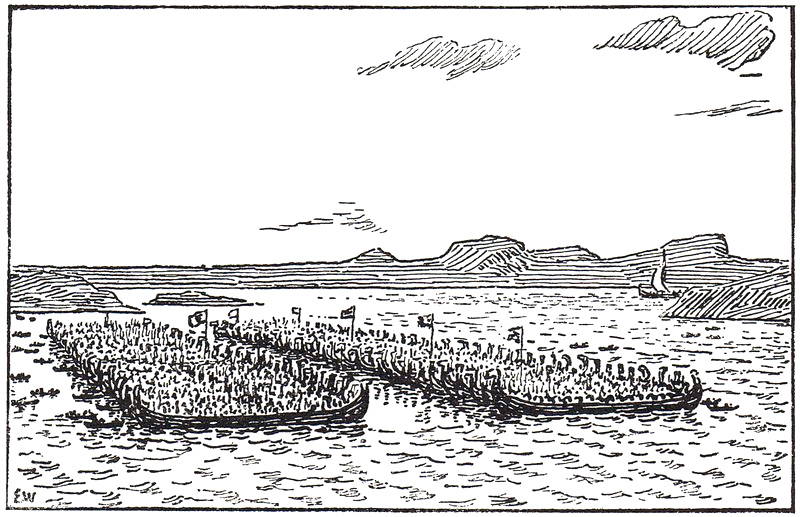 The Battle of Hafrsfjord as famously represented by Erik Werenskiold

Harald Fairhair consolidated and strengthened his power after the Battle of Hafrsfjord. Avaldsnes had been a centre of power for centuries, and there are reasons to believe that also Harald Fairhair had one of his royal seats there. All maritime traffic along the important trade route to the north had to pass through the narrow channel between Karmøy and Haugesund. The waters (?) on the sea side of Karmøy was dangerous, with islands and skerries (?) and difficult weather. He who controlled Karmsundet held the power of Nordvegr and could make his earnings from what we may call the country’s first toll booth. Harald Fairhair presumably ensured he controlled this place, like he according to the Haraldskvædi also did at Ulstein, further south in the middle of the Boknafjord.

This is how Harald Fairhair’s royal seat at Avaldsnes may have looked. Illustration: Steinar Iversen.

The Extent of Fairhair’s Realm

We do not know how far north or east Fairhair’s realm extended at the end of the 9th century. In Trøndelag and further north the mighty Earls of Lade had great influence throughout the Viking period, but it is possible that Harald Fairhair had an alliance with the Earl of Lade that secured him power and influence also in this part of the country. In verse 14 of Haraldskvædi, our most secure source for (knowledge about) the Battle of Hafrsfjord, the poet [skald] lists up all the wives that Fairhair separates from when he marries the Danish princess Ragnhild. This suggests alliances both in Northern Norway and Hedmark. In eastern Norway, around the Oslo fjord, it is presumed that the Danish king was more powerful at this time. And yet verse 9 of the Haraldskvædi kalles Fairhair for «allvalds austmanna» – the all-ruler of the east men. So who knows? That Fairhair according to the same poem married a Danish princess after the Battle of Hafrsfjord, may also signify that the battle resulted in strengthened alliances to the south and east. From other sources we know that Denmark was weakened by inner unrest and other conflicts at this time, so Fairhair may have used this to his own advantage.

Fairhair’s Nordvegr grew through the Viking period until it more or less became equivalent to the land we know today as Norway, and Fairhair’s descendants played important roles in this process. The mighty Earls of Lade in Trøndelag lost their position when the male line died out. And after the Danes had ruled Norway for a short period, from AD 1028 to 1035, Magnus Olavsson, called the Good, took over the throne. He was son of Olav Haraldsson, the saint, who was supposedly the great grandchild of Harald Fairhair.

The Viking period had poorly developed DNA-technology, so anyone could in principle claim they had royal blood in their veins. Laws of inheritance was also a complicated business in the 10th century, so that for periods brothers would share the royal power. The viking [?] kings garnered loyalty around the country by getting children with numerous women from the various districts. According to the Sagas Harald Fairhair had 16 sons. This was probably to his advantage while he was alive, but led to complete chaos afterwards. His son Eirik was the first to take power, but he had to kill so many of his brothers that heg ot the nickname Blood Axe. These conditions prevailed during the unification process, and it was first sometime in the 11th century that we can say that the Norwegian kingdom truly was established. But who this realm belonged to was fought over also the next couple of centuries.