Why do we not know for certain?

Did the battle take place in AD 872, or was it really some time a bit later? Did Fairhair gather all of Norway to one realm, or just a part of it? Why do we not know these things for certain? 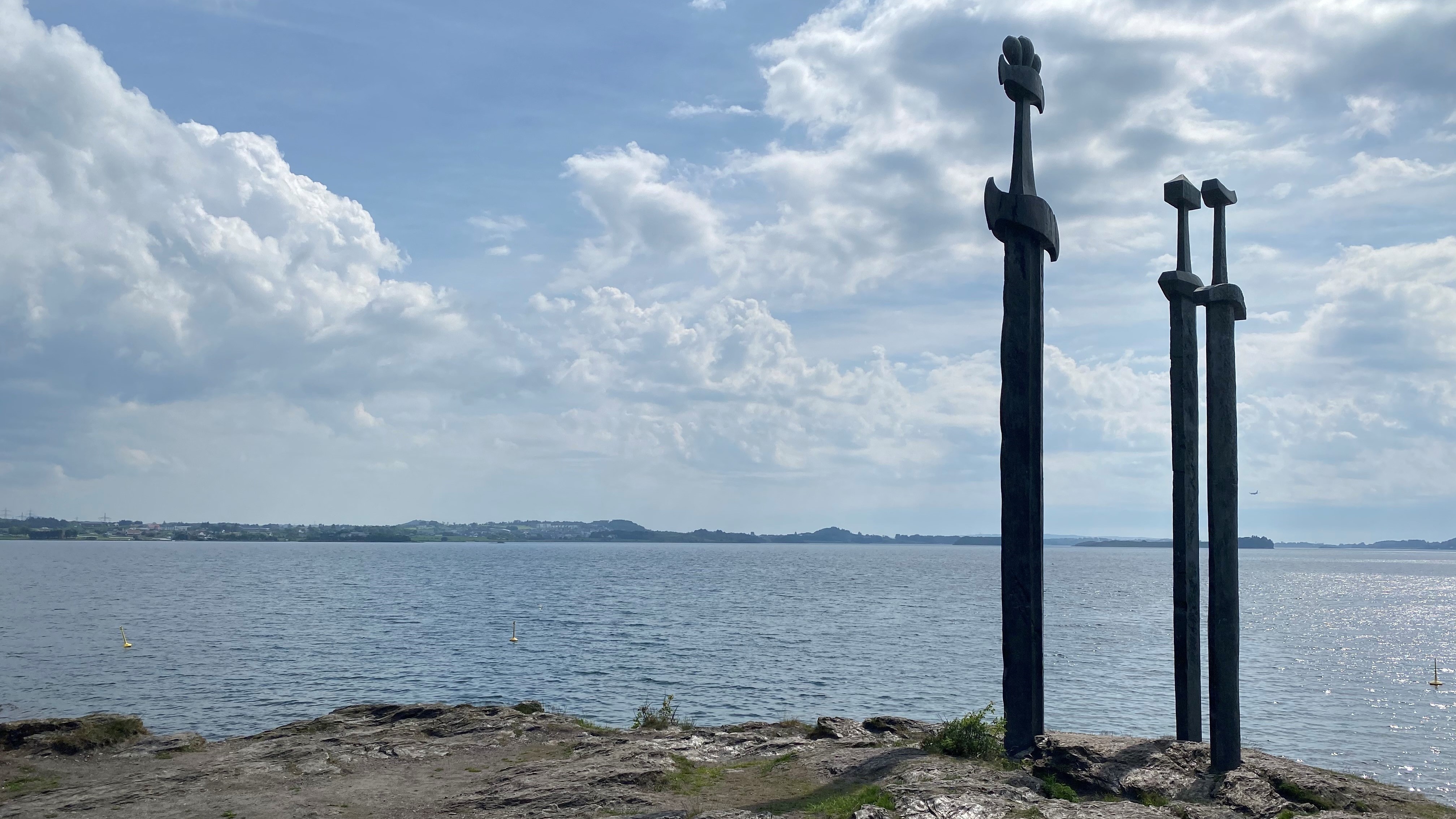 Hafrsfjord with Fritz Røed’s iconic artwork «Sverd i Fjell» (Swords in Rock) that was unveiled in 1983 in commemoration of the battle and the victorious Harald Fairhair.

The knowledge we of the Viking period (in Norway AD 800 – 1050) is limited, primarily because there was no culture for historic writing in the Nordic countries at this time. There were short runic inscriptions in wood and stone, but these texts give us limited information.

In some neighbouring countries, though, it had become common for church, kings and emperors to have annals written that recounted important events. We find in English, French, Arabic, Russian and Byzantine (Greek) sources stories about contacts with vikings, that were written down shortly after the events.These stories often recount plundering av battles, but also peaceful trade and the negotiation of deals and alliances. As in most storytelling, it is the most dramatic events that are given the most notice. Maybe this is the reason why the vikings have such a warlike reputation? The daily trading activity may not have been worthy of mention in an annal, but a brutal plundering of a monastery would have to be noted down. But the vikings were also tradesmen who sold, among other things, wool, fur and hide and tusks of walrus. 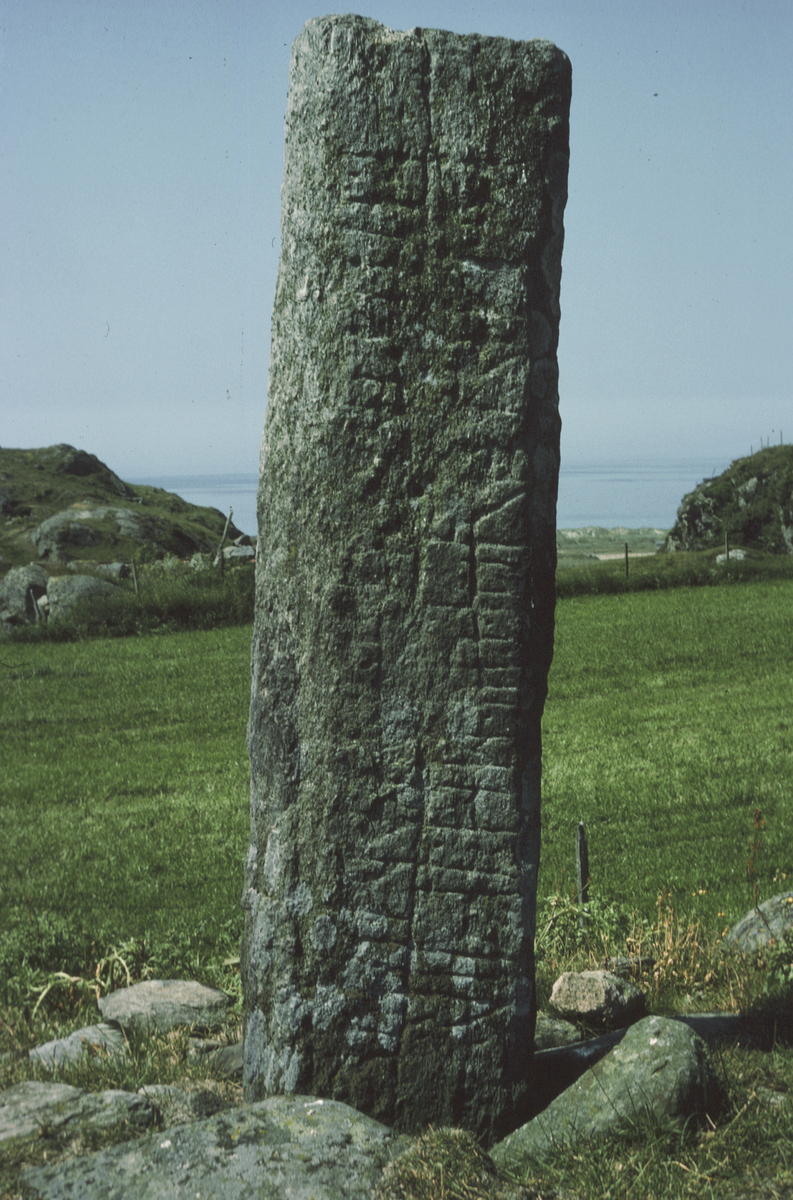 This runestone stands at Helland in Sola municipality in Rogaland. The inscription is probably from the 11th century, at the end of the Viking period (AD 800 – 1050).

The inscription reads «Tormod raised this stone after Trond, his son».

The Sagas, Our Richest Source?

Our richest source to knowledge about the Viking period may be the so-called sagas.They are stories that have been transmitted orally from generation to generation, in the same way as fairy tales, until they started to be written down in the first half of the 13th century. The most famous writer of sags was the Icelandic author (and politician) Snorri Sturluson. But his stories were therefore written down about 200 years after the ending of the Viking period, and more than 400 years after its beginning. How these stories had possibly changed in the period of their oral transmission is one of the many themes discussed by modern historians. What has been added and what has been taken away by the different story-tellers through the ages? What may be story-telling tricks and phantasy, to make the story more engaging for the listeners and what are events that really happened? Another issue is what the writer himself may have elaborated and interpreted from the materials that he had available. When we compare the sagas with the written sources from other countries, it is not always easy to find clear correspondance. And the sagas also contain some supernatural elements that are difficult for modern people to believe in.

But some of the content of the sagas is clearly base don oral transmission of the so-called skaldic poetry. These were poems or songs that had a fixed form with rhyme and rhythm. When such poetry is transmitted from generation to generation, it is less prone to change. For example, the songs we learn as children we will remember word for word, while the stories we are told, we’ll primarily remember the content of and not the literal words. This why many scholarsregard the sagas as reliable, especially the passages that rely on skaldic poetry, as these poems have probably remained unaltered since their conception, shortly after the events they describe.

Archaeological finds also provide us with important knowledge about the Viking period. And, as new technological methods develop, archaeological excavations provide a continually deeper picture of life in Norway at the end of the Iron age. Wood, pollen, charcoal, plant remains, hair and bone fragments that are dug out of the ruins of an ancient farm, can today be examined and dated pretty precisely. This way we can tell with some certainty when the farm was in use, what the people there did for a living, what they ate and what domesticated animals they had, among other things. The vikings were primarily farmers. This much we know for certain.
Some times archaeologists find metal objects, such as jewelry, tools, weapons and coins. These can tel lus much about trade, craft spesialisation, art and daily life. In Rogaland there has been found Viking age coins that show we have had contact all around Europe, from Ireland in the west to Turkey in the east.A large amount of coins from the Arabic califate, based in Baghdad, has also been found. 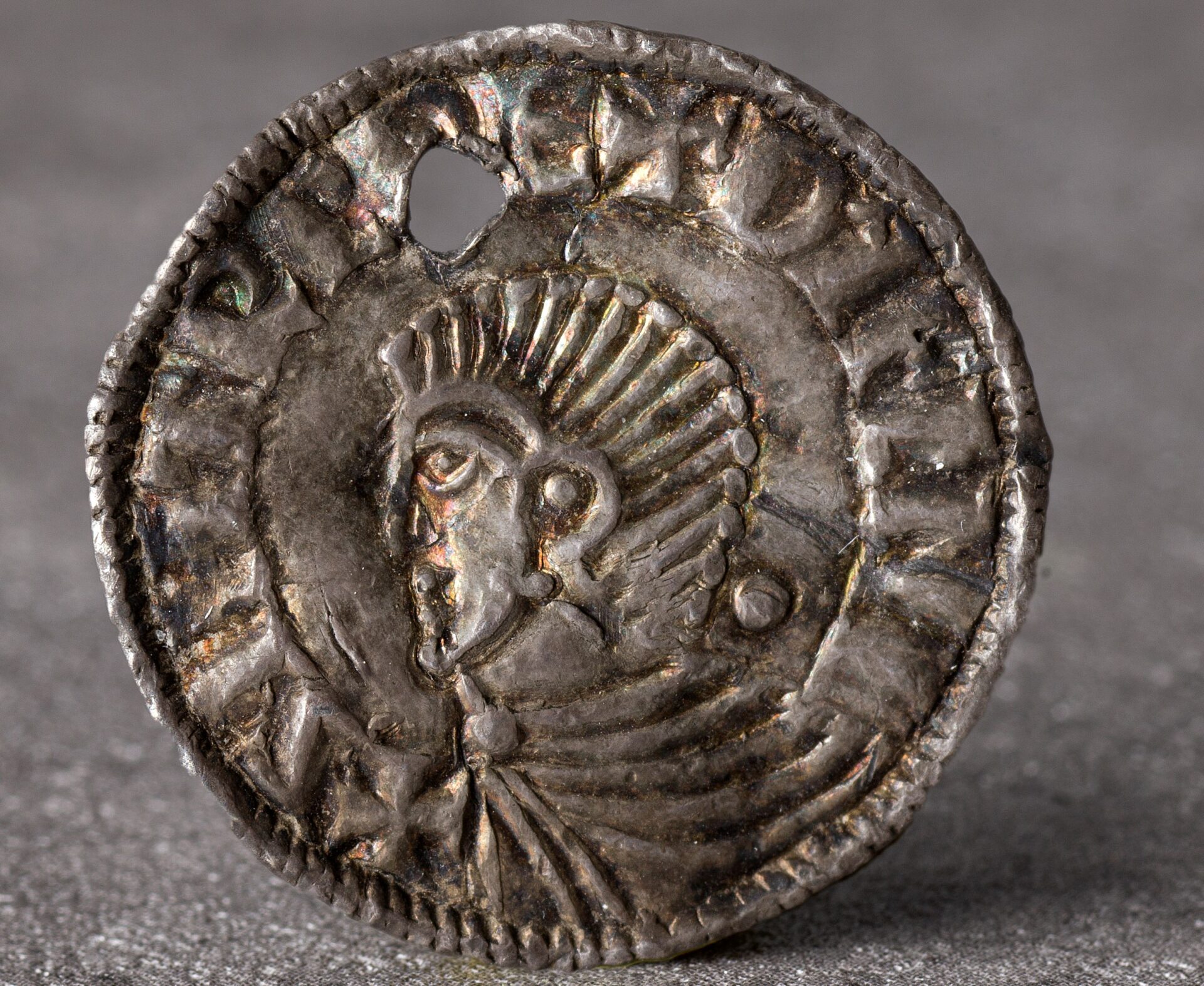 This is a Sigtryg type coin, and Irish-Scandinavian coin struck by Sigtryg Silkbeard, a Norse king in Dublin at the beginning of the 11th century. Three such coins have been found in Norway, all in Rogaland. (Photo: Archaeological museum in Stavanger)